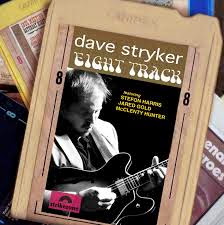 Dave Styker has been carrying on with his own version of the noteful rootsy tradition of down-home guitarists like Benson, Green and Martino for some time now. His latest album Eight Track (Strikezone 8809) pits him against some very groovy players--Stefon Harris (vibes), Jared Gold (organ) and McClenty Hunter (drums).

What's cool here is not just that this is a sharp-as-nails combo giving out with lots of soul and bluesy solidity. It is that in no uncertain terms. But they also address some soul and pop-rock classics from an era you might well (like me) have heard while giving driving a nifty new twist with an eight-track player going full blast while you cruised.

So "Superfly", "Superwoman", "Never Can Say Goodbye" and even the "Wichita Lineman" get the treatment here. All the songs were part of the wider age and the band finds fresh things to do with them throughout.

You know that Dave and Stefon can do their magic. But Jared Gold is a B-3 wailer of the old-school and he fits right in like a natural, which he no doubt is. McClenty Hunter has the soulful strut happening consistently on drums, too.

All this makes for a terrific album that also serves as a vehicle for some great Dave Striker guitar. If you got that old car out of your mental mothballs this would make a de rigueur eight track for it. But even so, it sounds very cool even inside your crib! Alrighty then!