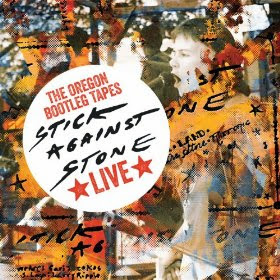 I never had the chance to hear the post-punk, no-wave band Stick Against Stone in their original ten year run (1981-90). That reflects in no way on the music. I was terminally busy in those days with school and otherwise broke (so what else is new?), so I missed a few things. They had a number of albums out and at the same time had a rather fluid set of shifting lineups.

We join them in 1985 for a rare bootleg camcorder recording that has been cleaned up and sounds quite decent considering. Stick Against Stone Live, the Oregon Bootleg Tapes (MediaGroove 004) captures them at two venues in Oregon in the summer of that year.

The line up thrives with the presence of vocalist-percussionist Sari Morninghawk, who has a vocal directness that fits right in with the times and plays some fetching percussion too. Richard Vitale (who left us in 2010) is the drummer. David Soule plays bass; Daniel Ramirez is on guitar; Robert "Xeres" Shepard plies the alto sax and flute. These names may not mean much to you at this point but for fans of the band it will help to situate what goes on in the tracks.

What is very cool is the loose togetherness of the band, which has some reggae feels, an occasional family resemblance to Beefheart lineups, the B-52s, Talking Heads, but no, really this is an original band. But there are hints of those influences now and again. but outside them and unique at the same time.

The guitar, bass, drums, percussion unity is very together and then the alto sax-flute floats atop in between Sari Morninghawk's choruses. The songs are memorable and different in their own way.

This was a band that had an attitude and a driving sound. They are on the beam, totally on top of things here. I am sorry I missed them. If you like out rock that fits in with the period you'll dig this one, I do expect!