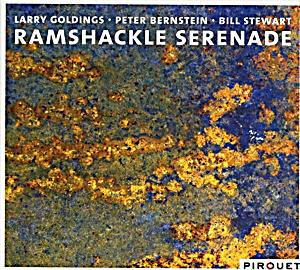 I was more or less minding my own business sometime in the early '90s, attending a free outdoor jazz festival in the courtyard of Lincoln Center in New York, when the opening act came on--organist Larry Goldings with guitarist Peter Bernstein and a drummer whose name I do not recall. I did not know these players then but I listened intently and liked what I heard.

From that time on Goldings became one of the more important, more acclaimed jazz organists on the scene. Peter Bernstein eventually went his own way and now is a highly respected player as well.

But they belong together! I am glad to have the new album in my hands of Larry Goldings and Peter Bernstein in a trio with the gamer drummer Bill Stewart. The album is Ramshackle Serenade (Pirouet PIT 3077), a collection of Goldings and Bernstein originals and a few standards, played loosely but very much in the evolved tradition of the organ trio.

To my mind Goldings and Bernstein very much are capstone cohorts in this context (and so also Bill Stewart) for their very simpatico interplay, for their facility in getting great lines going, for the way they extend the organ trio sound with some soulful but sophisticated utterances of real strength.

It is music that has enough grits and gravy to satisfy the traditionalist, yet takes it to high places that ramify what today's world is like.

An excellent recording on all levels.