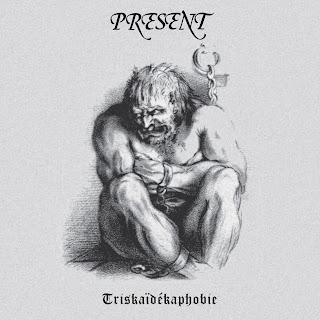 Belgium's avant rock outfit Present was one of the prime "Rock in Opposition" "chamber" groups of the '80s. Cuneiform has reissued their first album Triskaidekaphobie (1980) in a remastered-expanded edition that includes live tracks and lots of music, 20 minutes of previously unreleased live cuts plus the original album.

The brainchild of Roger Trigaux, composer, guitarist, keyboardist, Present comes through here as a band that does not show its age. The music sounds absolutely current, with intricate avant ensemble sounds that combine minimalist mesmerizing with avant rock and classical landscapes.

There are some of the intricacies of the serious side of Zappa, not necessarily alike in sound but equally committed to progression.

Triskaidekaphobie remains central to the avant rock lineage. If you missed this first album now is the time to catch up. Essential in its own way.