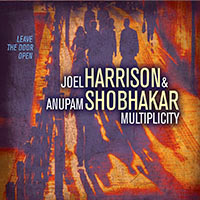 Fusions of Indian and jazz music go back a pretty long ways. I wont rehearse the history for you right now. Suffice to say that there are commonalities musically and cultural convergences that have made it so.

Today we have another effective confluence between the two musical cultures--guitarist Joel Harrison joins forces with the classical Indian sarod master Anupam Shobhakar and their co-led group MULTIPLICITY on the album Leave the Door Open (Whirlwind).

What's nice about this album? Plenty. Shobhakar is an excellent player and his influence gives more real Indian flavor than can be sometimes the case with these sorts of gatherings. Drummer Dan Weiss has real facility with Indian music, as anybody familiar with his work knows. Dave Binney, Hans Glawischnig, Gary Versace and Todd Isler make good contributions as sidemen and give the music a real push. Joel Harrison sounds excellent here, especially on slide guitar but otherwise as well.

The compositions have real jazz-Indian heft and that also goes a long ways to putting the music in a special orbit.

Anyone who digs the Indian-jazz nexus will find this one among the best of such projects. That's enough to make this essential listening.