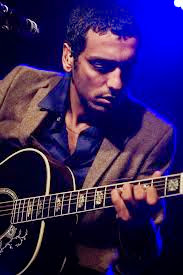 Dudu Tassa is that most unusual of phenomena, an artist with a natural ability to synthesize his musical roots. He has been long a popular commodity in Israel. For this, his Kuwaiti project, he combines a rock and contemporary Jewish sensibility with his ancestral roots in Iraqi Jewish music. His grandfather and grand-uncle were famous composers of Iraqi music in the '30s and '40s.

Dudu looks backward at those roots and converts them to a music of today in Dudu Tassa & the Kuwaitis (Rock Paper Scissors CD & DVD).

A DVD of interviews and concert footage supplements and makes you very open for the excellent CD that maps it all out in sound for you. What's remarkable is how he captures with musicians and vocalists the traditional early 20th-century mid-eastern music with a modern sometimes pretty heavy rock rhythm section and electric guitar--Dudu plays the often electric guitar and sings most of the lead vocals that have the mid-eastern melisma and all the nuances of the age-old musics, ornate instrumental playing on traditional instruments, yet the drive and freshness of rock today.

It's rather incredible music. Many promise synthesis out there. Dudu Tassa delivers, with the soul of a true artist and all the excitement and attraction such a combination of musical elements should give you. Dudu delivers with all you might hope for--and the results are magical.

Do not hesitate. Grab this one!