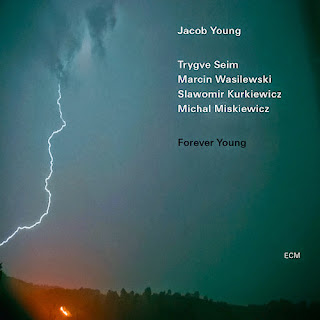 Jacob Young plays guitar and he composes some very ECM sorts of plushly beautiful music. His third album for ECM is with us, Forever Young (ECM B0020848-02). He plays a very nicely together acoustic in ensemble and as a soloist. He switches off to electric too and then we are hard put to pin influence on him. The band is rather pan-Euro with Young being of Norwegian-American descent, tenor and soprano saxologist Trygve Seim is from Norway, and then there are three Polish players in Marcin Wasilewski (piano), Slawomir Kurkiewicz (double bass), and Michal Miskiewicz (drums).

Seim has some of that dramatically projecting Garbarek lyricism; Young has given Ralph Towner a good listen but goes his own way with that and has other things that happen when he lines on electric, nicely; Wasilewski has some Jarrett-Corea channeling and the music sometimes reminds me lyrically of early Eberhard Weber. But that is only to say that this is very much an ECM sound. Would you have been upset if you heard a Hank Mobley influence on an old Blue Note release? No. So if we take that as a given then we open up to the music itself, which is what it's all about, really.

We take it all in and find that a quintet of excellent musicians plays some very lovely, harmonically fluid music and solos with real style and eloquence.

Is this the album of the year? Well, not for me. But this is not a horse race either, so Jacob Young comes across with something very, very nice and the finish line we'll leave up to someone else for now. You will no doubt like it. And you can play it for your mom and she might well like it, too! It's people-pleasing without playing down to them. Nice!