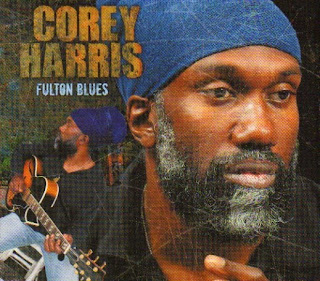 Corey Harris, vocalist, guitarist, bluesman. His Fulton Blues (Blues Boulevard 250360) combines the old country blues and the electric urban blues in ways that have a contemporary ring. He sometimes picks out on an acoustic and reminds you of the early Delta blues, then gets a contemporary ensemble and does something inspired by Chicago greats.

In reality he gives us his own take on both periods of the blues, sings with a fullness and soul, and tells those blues stories that make it all real. He lived in West Africa for a year and brings some of that in, though more in terms of feel than the obvious riffs and such.

He can do much just with his acoustic and his voice, like the old masters but of course not to duplicate, because that is impossible and ill-advised.

But he gets something of his own out of it. And his guitar playing is very good, too!