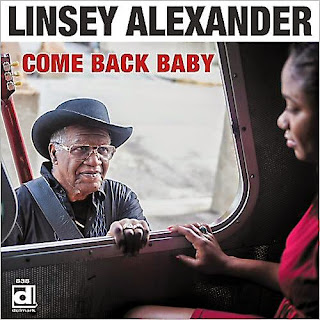 Linsey Alexander has been breaking things up on the Chicago's North Side blues clubs since the '90s. We caught his first Delmark album Been There, Done That here on November 23, 2012. Now he's back with another strong one, Come Back Baby (Delmark 838). Linsey plays guitar with a hint of a BB King influence, but adapted to his way. He sings with plenty of soul, too. This new album features a full band, often enough with horns, and 11 of 13 cuts have Linsey's original stamp.

His vision of the blues is as real as you can get. Lost your car and your house and you got no place to live? THAT is when you play the blues. So drunk you lost your car and house keys, your false teeth and you gotta call your wife from your girlfriend's house to come and get you? Now that is the blues!

He has a little humor in there and the lyric twists that make the "telling" of it that much stronger. You know the Chicago audience is listening to the story as much as the music. The blues as a living entity is a verbal telling as well as 1000% soul.

And Linsey has that going, big time. This one is very together and lots of joy to listen to!

Posted by Grego Applegate Edwards at 6:02 AM