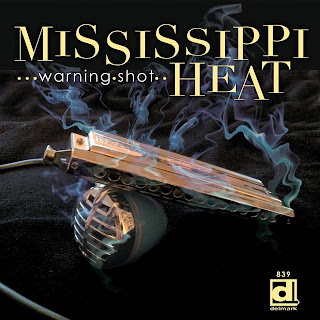 Mississippi Heat gives us the real blues, urban with a little country, Chicago style. The band is headed up by harmonica wizard Pierre Lacocque. They join us in their latest, Warning Shot (Delmark 839), and raise up a fuss.

If the blues have never left it's for a reason. And they have not! You spend any time in Chicago you know why. It is a life. It lives and breathes a life. Like right now I am not in Chicago but we ain't got much heat and it's snowing outside. Still, I know the sun's gonna shine someday--in my back door. That's what it feels like and the blues give you what you need. Mississippi Heat knows all of that. And they come through on this album with it.

Big ole mama Inetta Visor belts out the vocals for much of the numbers here, all but one written by Lacocque. The songs are in the soul-blues tradition and the band has the horns and backup vocals that exemplify the way to do it. But then they can get a slide boogie going too. Michel Dotson and Giles Corey play some fine guitar--along with Carl Weathersby on two cuts. They do the honors like they should. And the whole band rocks it. Lacocque shines on harp.