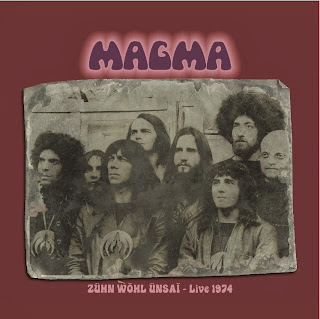 The French avant-prog rock outfit Magma made some phenomenal music in the '70s, yet we in the States did not always hear about it. I missed them then and only caught up later. Just how daring their music was can be heard on the newly issued 2-CD live set originally recorded for broadcast in 1974 by Radio Bremen, Zuhn Wohl Unsai (MIG 01102 2-CDs).

By then they had several albums behind them. The shifting lineups were freeze-framed as they existed in February of that year. Christian Vander continued at the helm on drums, vocals and compositions, Klaus Blasquiz vocalized as well, Jannick Top was on electric bass, there were two keyboard players in Michel Graillier and Gerald Bikialo, and Claude Olmos was the guitarist.

What we hear in good, apparently cleaned-up audio, is the band in full-bloom. There is of course the hardness of the rock element, but then new music avant classical and jazz influences, a pronounced compositional uniqueness that gives prominence to very advanced vocal lines that are harmonized especially interestingly by keys, punched very uniquely in the bass, supported with electric guitar....And rhythmically the music is quite advanced with lots of asymmetries and polyrhythmic polymeters and such.

You can hear some roots perhaps in early Soft Machine and Zappa, but more as close stylistic affiliations than derivations. They are not as much about a jamming, solo sort of music as a long-formed compositional deluge. The vocals and harmonic underpinning are striking.

They were unique to the extent that I can not readily describe further except to say they were so new and different that no doubt some didn't get it in the audience and they still strike me now as ahead of things, in very much their own way.

This live set is essential to get into the core of what Magma was about in 1974. Wow!