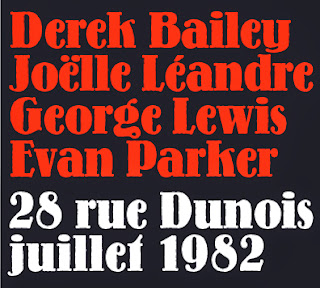 If you know about free improvisation and its legacy, you perk up when you get a previously unissued recording of Derek Bailey, Joëlle Léandre, George Lewis, and Evan Parker. That's what you get with 28 rue Dunois juillet 1982 (Fou Records CD06). Fou is Jean-Marc Foussat's label. He himself recorded the foursome during their July appearance at Paris Theatre Dunois.

There are a number of reasons why this is worth hearing and why it is of central importance. The European free music scene was beginning to get global attention by 1982, and in the trajectory of these four masters they were in a period of significant growth. Derek Bailey had rapidly established himself as a prime innovator in free guitar; trombonist George Lewis had come to the attention of the world in a big way with Anthony Braxton but continued to expand his playing in the very free context, contrabassist and vocalist Joëlle Léandre was really grounding herself as a primo free new music innovator but had not gotten a lot of recognition as yet, and of course saxist Evan Parker was quickly getting world recognition as a major innovator but with these three in tandem had not performed, as far as I know.

To hear these four together back in 1982, in great form, playing uncompromising avant open-form music in an extended program is revelatory and exhilarating. These are masters of the art. They show themselves as some of the most thoroughly original of all of them, carving out a language that would become part of the common vocabulary in years to come.

And so we need to study this recording--and of course experience it with joy. Yes!