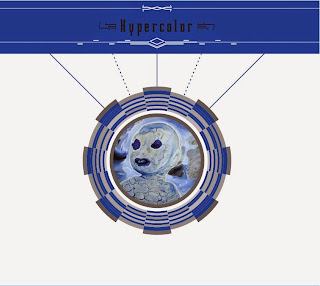 Eyal uses vibrato, variable attack and an individual sense of sound to get his very characteristic style, which you can hear to great advantage on this trio outing. The music has an avant surf element, psychedelic largess, and a driving hard rock temperament to carve a group sound.

Ligeti is a drummer who has far more than a backbeat orientation here. There are lots of interesting things he does throughout. Ilgenfritz holds down the center and keeps things rock solid while doing worthy things as well.

There are free avant touches in here--it isn't all rhythmically straightforward, but also tumblingly free. And Maoz can take it out at times and does. There is also a touch of semitic tonality reflecting Israeli roots.

But all that may be true of a number of fusion outfits playing today. What sets Hypercolor apart is real originality. Eyal is fast becoming one of my favorite fusion guitarists because he refuses to stay with the given. He is one of a kind and Hypercolor is that, too.

Have I said enough to pique your interest? This is an excellent outing!

Posted by Grego Applegate Edwards at 6:12 AM