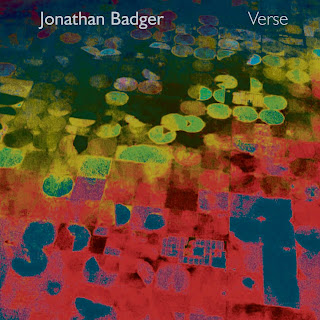 When something hits you, it hits you. Jonathan Badger, electric guitarist and composer, hits me. At least his album Verse (Rune 394) does. He was a student of Robert Fripp and you can tell by listening to this album for its multiple guitar, "League of Crafty" influence. But then he goes beyond it into his own zone, even though the interlocking guitars are there in a different way.

Now all that is well and good, but it is in the music that Badger makes his originality known. This is a kind of symphonic tapestry for guitars, voices, well-produced instruments and alterations.

I wouldn't want to describe it here except to say that it is contemporary avant rock-oriented composition and multiple-guitars are central to it.

I strongly suggest you hear this one. All the words in the world won't begin to describe it and all the labels I could put on it don't quite work either. If you want to go to a new place, just get the recording!