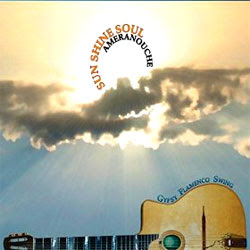 With the recent revival or the Django Reinhardt-Gypsy Jazz style of guitar-centered jazz we have experienced a good deal of music that sounds near to the Hot Club Paris ensembles that served to establish Reinhardt as the first bonafide European jazz innovator. Remakes are fine and have a place in reintroducing and popularizing various styles, but ultimately when such as style begins to progress in its own right, all the better for the music scene.

We can hear a clear development happening with the trio Ameranouche and their album Sunshine Soul (Red Squirrel Records). There is the solid chunk of rhythm acoustic guitar which is so important a part of the style, there is solid bass backing, though much more adventuresome than typical of Gypsy style jazz as we ordinarily hear it, and there is virtuoso, extroverted lead acoustic guitar to be heard as one might expect. But the solos both partake in the Reinhardtian style while they extend it and go beyond it. It is no accident that the album cover proffers the music as "Gypsy Flamenco Swing," because there is a flamenco element to be heard, too. Nonetheless all of it has original directionality.

It's an album of good music, excellent guitar playing, excellent bass work, plus it goes someplace with the Gypsy style that other groups have not. For all those reasons I recommend the album to you heartily.