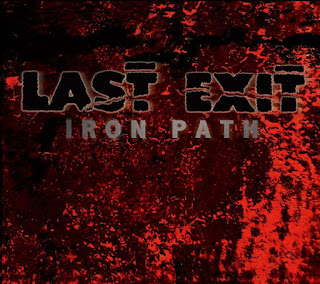 Electric guitarist Sonny Sharrock was the prime moving force on his instrument during the first years of free-avant jazz and in the years to follow. No one came close to approaching him for energy and sound scatter excellence. He did not gain fame especially, but those who knew the music recognized him as the master of the guitar freedom he espoused.

When in the past phase of his career he turned to avant-free rock, there was nothing half-hearted or tentative about it. It was and is completely convincing. His recordings with various drummers, Elvin Jones, Ginger Baker and often with Bill Laswell on bass and Peter Brotzmann on reeds were seminal. As a member of Last Exit he excelled as well.

That group's only studio recording, Iron Path (ESP 4075), recorded in 1988, was an exceptional effort and its re-release this spring is a very welcome occasion.

The recording finds Sharrock, Brotzmann, and Laswell in tandem with drummer Ronald Shannon Jackson, who most certainly was a fundamental part of this band and comes through excellently here. The studio album has the hardness of the live recordings but a bit less of the brash assault and more compositional and ambient elements. That is not to say it is any less essential than the others, but that it is slightly different.

Sharrock sounds beautiful, Brotzmann fire-y, Laswell exceptionally primed and Jackson a controlled whirlwind of percussive strength. It is a tragedy that Sonny left this earth only three years later, just as he was on the verge of a stardom no one would have expected years before. And very sad too, that Jackson left us in 2013, far too early.

We can take solace in this excellent date. It was one of the conflagration's very best and sounds every bit as current today as it did back then. Viva Last Exit! Do not miss this one now while it is again available. It's a monumental outing!