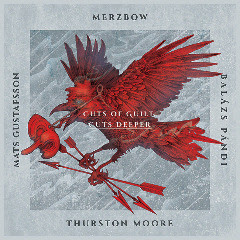 If you expect a pristine clarity, simplicity and quietude in the music you hear, you won't be getting it on the double CD or double LP Cuts of Guilt, Cuts Deeper (Rare Noise RNR052 and RNR052LP). In fact this music is the opposite, with nebulaic maelstroms of chaotic collage. complexity and cosmic noise. The quartet sees to it that all hell breaks loose, in very vivid ways. No wonder. Merzbow (aka Masami Akita) brings in his already dense concept of noise and power electronics. Added to it is the wind strength of Mats Gustafsson on saxes, clarinet and more power electronics. Then there's the very all-over guitar chaos of Thurston Moore, best known for his seminal work with Sonic Youth but also an avant garde artist in his own right (he shared a program with Cecil Taylor and they played some together, for example). Finally there is the bashing heavy rock complexities of drummer Balazs Pandi.

The two-CD or LP set gives us a long intertwined poetic essay in very dense noise. Generally those sounds are multi-dimensional, continuous and, with the exception of the third of four segments where things get relatively open and quieter, unrelenting.

You generally get a clear picture of who is doing what, except perhaps how much of the power electronics is Gustafsson and how much Merzbow. But the overall effect is endlessly dense.

Now maybe this is something you are going to be predisposed to like or hate based on where you already are in your listening. I would like to think though that any adventurous soul could come to appreciate the sounds very much. It has some very extreme guitar skronking, some very deeply chaotic electronic noise, some fine honk-scatter sax work, and very busy, heavy drumming.

Don't expect a Sonic Youth sort of thing, except a few minutes of the Sonics in their most extreme moments. Do expect the noisy chaos of Merzbow, augmented by three musicians who are most seriously on the same page here. It's exhilarating, extreme, to some it might be maddening at first, but in the end it is a fine, exemplary work of noise art.

I happen to find it a great listen and endlessly fascinating. Maybe you will, too? Open up and give this one a chance to work its magic.