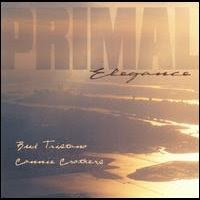 Today's album is most unusual. Connie Crothers has been making advanced free-but-grounded jazz for many years. She is a pianist without peer, a essential creative force in the music today. Her music can look back to earlier jazz roots and you sometimes hear new music elements, all forged into a stylistic originality that is all her own. But if you told me she made a rock album up until recently I would have been incredulous. Well, it so happens she did, in a way, back in 2002. Bud Tristano, son of the titan pianist Lennie, happens to be a very good guitarist who mostly comes out of an advanced hard, metal stance.

Connie and Bud made an album together, Primal Elegance (New Artists 1038CD) that I am only now aware of, thanks to Connie kindly sending me a copy. It is indeed a melding of rock guitar elements and Connie's inimitable piano freedom. This might have been a failure if the two didn't bridge the distance by very close listening. I've heard things like this that did not come off because the connection was never quite made. Not so, this one.

Bud most of the time keeps to free expressions of a metallic sort, well constructed, virtuoso-oriented. He does also adapt himself to less rock-oriented freeness, but it is primarily Connie who shifts what she does, at least at the beginning. What she does at times is adjust toward a centered tonality, modal-eastern and bluesy. It isn't that she plays in ways unlike her. And in the end she gradually gears into complexities that Bud responds to with rock sensibilities and takes it outside himself via bends, feedback and sometimes non-centered chording.

There are ten improvised segments in all. They showcase a fine guitar playing and a brilliant seconding and/or directional openness on Ms. Crother's part that puts it together and makes it much more than just a fascinating meeting of disparity. Ultimately most of the time it achieves a oneness that you would not expect to hear if you didn't already expect great things from Connie. And of course it is Bud's prowess and adaptability that brings coherence on his side as well.

This may not be what a rocker expects and it isn't what an avant free acolyte expects, either. It is a joyous surprise that you need to hear closely to fully appreciate. If you aren't afraid of mixed categories and seek synergies, this is one you will want to explore!