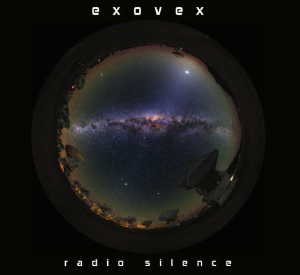 Today we have an interesting new (to me) alt-progressive rock band named Exovex and their album Radio Silence (self-released). This is the brain child of Dale Simmons, who wrote all the songs, plays guitars (well), does all the vocals, plays bass and keyboards throughout. He is joined by Nicole Neely on cello, viola and violin, Richard Barbieri on keys for one cut, plus the drum duties divided up between Keith Carlock (2 cuts), Josh Freese (3 cuts) and Gavin Harrison (one cut).

Simmons gives us moody space-age sorts of songs, good ones, well sung with wall-of-sound rock thickness, a hard edge at times, a nice lead guitar presence and a kind of ambient feel throughout which makes this music sound more contemporary than retro.

The songs stand out very nicely and the arrangements give structure. As with this sort of thing in general, the good songs make it all work.

I come away from this album with a real appreciation for the talent of Simmons. It's an album that stands out as a very good example of how this genre of rock can continue to produce worthwhile music. Exovex is most definitely that.

Posted by Grego Applegate Edwards at 5:59 AM