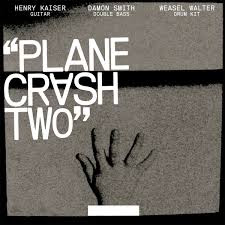 If sometimes I cover albums that have been out for a while, it is not for lack of anything new. It's because the music is central, more so than the politics of review jockeying, poll-meistering or otherwise fulfilling a role in the INDUSTRY, though some of that is inevitable if you post regularly in the current musical world.

So today we go back to an album from last year that I missed, the potent trio of Henry Kasier's guitar, Damon Smith's double bass, and Weasel Walter's drum set for the album Plane Crash Two (New Atlantic Records 024).

It is a free trio date with Henry Kaiser in a post-Derek Bailey guitar mode, meaning that he seeks clusters of extra-extended sound complexes along with warbling melodically outside sustains. In perfect simultaneity is the bass abstractions of Damon Smith along with the clutter, clash and power diving drumming of Weasel Walter.

The music ranges between sound-color textural emanations and avant psychedelics, and it does so with excellent creative thrust.

In the process all three define personal spaces of out-taking that meld together in ever-interesting and ear-awakening ways.

It is an excellent example of Henry Kaiser on the outer fringe, but also Damon and Weasel in interactive openness to create a trio of special sonance and varied warp drive modes.

This is a fine example of the fine line between power and finesse in avant trios who do not eschew a hint of avant rock as well as free jazziphonics.

Good show! Get it.

Posted by Grego Applegate Edwards at 6:22 AM