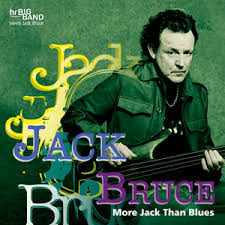 By now it is pretty clear to all that when we lost Jack Bruce we lost one of the pioneers of advanced electric bass, an irreplaceable vocal force and a major composer-performer in rock and jazz in the latter 20th century. A new DVD/CD set of his 2006 German Jazzfestival performance is out, and it is a most welcome addition. More Jack Than Blues (MIG 80312 CD & DVD) gives us an hour of Jack in very good form, singing and playing some of his most familiar material (and some less so) with the HR Big Band as his backdrop.

The arrangements are very much a plus, appropriate and expansive without countering the thrust of the Brucian way. So "We're Going Wrong," the old Cream number, has layers of combustible horn lines that further the song. So also there are some very nice Jack and bigband versions of "Never Tell Your Mother She's Out of Tune," "Rope Ladder," "Born Under A Bad Sign," "Theme from An Imaginary Western," and even "Sunshine of Your Love."

Jack's bass is in full bloom here, but he also plays acoustic guitar and piano in his inimitable way. His vocal instrument may show the slight effects of time, but it has everything there to make it the shining singularity it was and is.

The HR Bigband is a powerhouse with excellent, well rehearsed ensembles and worthy soloists.

This adds to every number a new jazz-inflected breadth without losing the primacy of the original versions. That night in Frankfurt was a triumph and one cannot watch and listen without a feeling of the sadness of loss. Yet of course Jack lives on here for us.

A real addition for all Jack Bruce enthusiasts, and a good set in itself. I am glad to have it! Check it out.