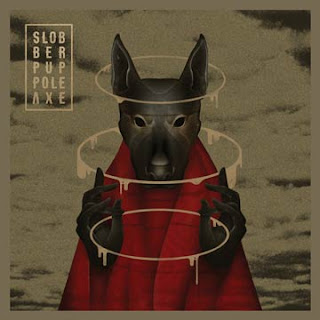 Slobber Pup? Hell, yeah! They come front and center with their second album, Pole Axe (Rare Noise). It is the potent pairing of guitarist Joe Morris, keyboardist Jamie Saft, drummer Balasz Pandi, and for this outing the saxophonics of Mats-Olof Gustaffson.

The Rare Noise label favors some heatedly outside electric music and Slobber Pup makes some of the best such sounds of any outfit going. The potent combination of the plugged-in versions of Joe Morris and Jamie Saft and the sheer viscerality of Mats-Olof Gustaffson joined with the creatively out percussives of Balasz Pandi...all this portended some great music when I put the music on my machine. I certainly was not disappointed.

One of my very first musical mentors was right to remind me long ago that, as much as technical and instrument-specific abilities that you must learn in your early days is crucial, it ultimately has to fit properly into a group context if you are going to play music in your life. Nobody thrives much doing nothing but unaccompanied solos...except perhaps Cecil Taylor, but that's another story. And even he gets a group together much of the time. And face it, the solo piano is complete in itself if the player is exceptional. Not to put down the many excellent unaccompanied solo efforts of avant improvisers out there since the early '70s either. Just a general truth.

And so Slobber Pup combines some very potent players who work together to create a very cosmic group sound, filled with virtuosity now and then but also working to achieve a special blend of free electrics that is much more than a collection of solos and accompaniment. I suppose you could say at times that all are soloing at once, yet there is a lot of attention to achieving four-way torque.

On the other hand you get moments when Joe Morris lets his special outside ability fly in the wind overtop the maelstrom, with some of his best cranked playing ever.

So you guitarists reading this should take note--what he is doing here is a product of a great deal of hard work, years of finding his own voice, and then a long time interacting with others in ensembles, finding the give-and-take.

And that is certainly true of everybody in Slobber Pup. It's hard to sound like this with the sort of edge-of-the-universe virtuosity that is a good deal harder to achieve than some of the mainstream normalities. I don't mean playing on changes; that is an art in itself. I mean that it is very difficult to fly without instruments with consistently artistic results, so to speak, to take off for parts unknown trusting the instinctual freedom you achieve with years of dedicated, sometimes financially un-remunerative, finger busting hard labor and mutual cooperation.

All that goes into this music. And all that helps make this music a deluge of creative overtopping, a fine, fascinating suite of electric excesses and bold sound sculpting.

Bravo! Check this one by all means if you seek to go into musical orbit as a passenger on a first-class spaceship.