Raoul Borkenheim ECsTaSy, Out of the Blue 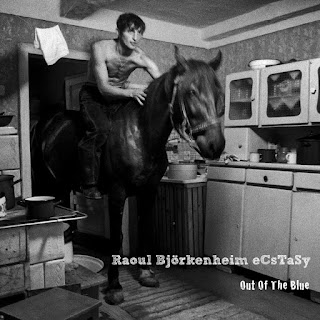 Finnish electric guitarist Raoul Borkenheim and his ECsTaSy/Transcendant Quartet give us an exceptional set on the second album for this line-up, Out of the Blue (Cuneiform Rune 413).

It is an adventurous gathering of originals--with shorter song-oriented offerings alternating with longer improvisatory excursions that affirm that this as a band of real strength. The rhythm team is very open and creative as well as driving; Paul and Raoul turn in some great work as soloists of originality and vision.

In the end Borkenheim stuns with his very developed sense of line-composition, bluesy and outside alternatingly, a sort of dynamo that takes something from the Terje Rypdal advanced melodic modernity and makes of it his own original style. He has chops, certainly, but most importantly a musical sensibility that avoids all cliche and propels us all into a stratospheric zone.

Combine Raoul's guitar wizardry with these three very excellent sideman and you have an exceptional album of avant fuse-rock.

It's one of those albums that will wow anyone dedicated to the new electric jazz.