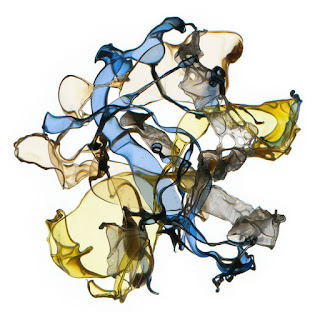 Sandy Ewen is an avant electric guitarist both  original and iconoclastic. I covered her in a group setting several weeks ago, and today I am back with a solo effort, Tributaries (Chiastic Society 05 2016). It was originally an online only release from May of 2013 and now it is out on CD.

This is sound color improvisation, extended techniques so thoroughgoingly advanced that if you did not already know the sounds were produced by an electric guitar, you might not figure it out.

Six segments give us plenty to ponder. She clearly is at times preparing the guitar, at other times striking the strings with untraditional objects. With amplification and use of aural space the sounds come to us as from some other place, inter-planetary, extra-planetary, a zodiac-a-teria with percussive elements, aetherial feedback, orchestral fullness and mysterious sparsities.

It is not quite like what anybody else is doing with an electric guitar these days, and happily it provides us with a cornucopia of sonic universes.

Once I heard it a few times, I got it. It is a very creative take on soundscaped guitar tapestries. She is one of a kind!

Listen to this, get it, if you seek something good on the edge of possibility.
Posted by Grego Applegate Edwards at 6:23 AM