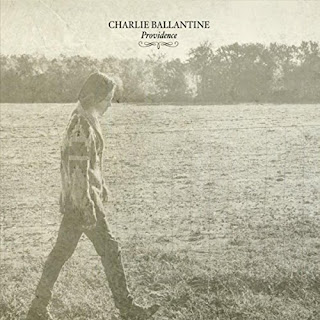 Some albums just lay out naturally and speak to us without holding back but also with a kind of natural directness. That is so of electric guitarist Charlie Ballantine's album Providence (self-released). It's a set of (mostly?) originals that set Charlie's bluesy-folksy electric guitar against a nicely put-together group with Amanda Gardner on alto, Josh Espinosa on organ, Conner Green on bass and Josh Roberts on drums.

There is a sort of country-pie rural flavor to the music that might remind you a little of early Pat Metheny but not exactly. Charlie solos nicely in a very laid-back way that is not out to wow you with chops though there is evidence of all that. No, he wants to build moody, bluesy edifices of sound, to capture a shifting dynamic that puts forward its particular, relaxed, local kind of significant approach.

It's a sort of music that decidedly is more rock-jazzish than smooth, that floats into your listening mind without a lot of sweat and struggle, and so should appeal to a broad swath of audiences without sacrificing artistic merit.

I like it. It just hangs there for you like a good painting. It does not go out of its way to call attention to itself, yet it is there to examine in some detail should you be so inclined. It's mood music for mood music more than some stated activity. And it pleases without pandering.

Shoot it on and you'll find yourself drifting in a very nice way.
Posted by Grego Applegate Edwards at 6:05 AM