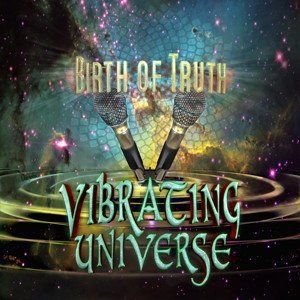 I take today's post to expound on the virtues of a local New Jersey group, Vibrating Universe. They were kind enough to send me their new double-CD Birth of Truth (self released). It is wall-of-sound post-prog rock with very nice guitar work by Derrick Klybish (who plays bass as well), concept and lyrics by David Pardine and all vocals divided between him and brother Brian, with Brian on keys. Both are also jointly responsible for the music writing. Derek Schildkraut holds up the rhythmic end nicely as the drummer.

It is a sort of cosmic-themed progressivity. Sometimes the melody lines are direct and essentialist, almost chant-like in their single-minded thrust. At other times they are filled with multiple parts and/or harmonic richness. There is something distinctive going on in any case. And the lyrics are searching and space-directed in ways that complement the musical spaciousness that is a hallmark of this group on this their extended sojourn. The vocals are generally very full--with multiple voices hitting the senses strongly, contrasting and layering nicely with the full-bore instrumental density.

I will not say that this sounds like a present-day equivalent of classic Moody Blues sides because the sound is not the same, but the intent to send the listener into an experiential orbit is nonetheless there like the Moodys at their peak.

But no, it does not sound retro or dated so much as it partakes in an outward-bound thrust in common with early classic prog, only it does so on its own terms. I understand from the band that they took no little effort and time to get the sound just right, and it most certainly shows.

There are no dead spots or fillers in this involved two-CD presentation. Far from it. All lays out very well and originally, lyrically, cosmically.

I do recommend this for those who seek spacy-lyrical song fare of a decidedly original sort. Bravo!


Posted by Grego Applegate Edwards at 5:53 AM