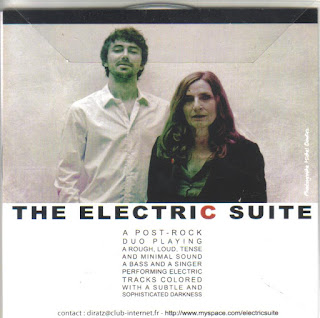 When in the course of the many submissions I receive as part of my blog writing I get something in the realm of the totally unknown it is not in itself unusual. But when the artists "prefer to remain anonymous," as the guy in that very old show "The Millionaire" did (showing my age again?), it is pretty unusual. Who would not want their names emblazoned on their CD? Well, no matter. Today we have "a post-rock duo playing a rough, loud, tense and minimal sound. A Bass and a singer performing electric tracks colored with a subtle and sophisticated darkness," to quote the front cover. Well, yes, that's so and in the end the music communicates fully even if we only know this outfit by the title of the EP CD, The Electric Suite (self-released).

Put expectations aside and open your ears as I did. In the end we get six songs, hard-hitting mostly, with the electric bass played with zeal and a guitar-like fullness, quite nicely really. The singer counterpart is a woman who sounds like herself, poetic, declamatory, dedicated to a certain intensity that matches the bass playing.

After you listen a couple of times it makes very much sense as a unique and creative duo effort with the intensity of avant rock but yes, post-rock, in that it does not follow any formulas that a typical rock outing might.

We get some pretty intense bass plying and a sung poetry that places it all in the contemporary underground, and all the better for us, as it does so in ways that will reward those who open up to it.

And in the end this is music that is the opposite of anonymous, in that it is very personal and original. It is, after all, the music of "The Electric Suite." And they are definitely onto something.

PS: After I posted this I received some additional info on the group from a most reliable source:
The Electric Suite, according to the vocalist on the CD, Carla Diratz, was recorded in November of 2010, after she and bassist Corentin Coupe got together in Montpellier, France. They created some 20 tracks or so in a matter of 3 months and played a few gigs ... and then for various reasons, they were unable to tour and play gigs that were offered. So the duo separated. One and a half years later they decided to get together again and added guitar and drums to play the music they'd recorded, and voila, her new group No White Of Moon was born.