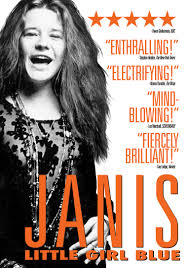 I grew up and came of age in the later '60s. Of course there was no way I did not know of the huge talent and big voice of Janis Joplin. I loved her but I also had some misgivings about how she was packaged and presented. "The next Bessie Smith?" Well that helped us get into Bessie Smith's beautiful recordings but no, she was NOT that. What bugged me about her life and death as it was packaged for me, something I could not quite put my finger on at the time, is beautifully clarified in the Amy J. Berg film, Janis, Little Girl Blue, which is now available as a nicely packed DVD with some extras (MVD Visual 8304D).

It has a real handle on, yes, the career-bio track of Janis, but it also delves deeply into the very personal side of her life, who she was, way down inside. So we get extremely relevant footage of recollections by those who knew her well (those still alive anyway), like her sister, bandmates, boyfriends/girlfriends/lovers, etc.

And we get all the dazzle of her meteoric, spectacular rise to world fame at a time when perhaps more people in the world were stoned than ever before or since, and if you were there and remember anything about it, or if you were on the fringes of it and mostly observed, being very stoned did not necessarily give you insight into others around you so much as it heightened a sense of self (-in-putative world). With so many very stoned people surrounding her, her real needs were less understood, maybe. But Amy Berg nails it in terms of what her very sympathetic documentary uncovers on the "real" Janis Joplin.

She was a very intelligent and very musical woman whose youth and early adulthood were not extraordinarily conducive to who she was. She was taunted as a sort of misfit in high school, not at all the center of the universe that she perhaps later became for a very few years. It had lasting effects on her. But when she discovered she could SING, really sing, it changed everything. Suddenly she was not only accepted, but welcomed. The freak scene was opening up in San Francisco. She eventually managed to hook up with Big Brother, a not entirely talented psychedelic band that nonetheless gave her a platform to develop into a rock singer of great power. As a woman then, she was given a role as the showcase vocalist, but in those days especially it was rare for a woman to get involved directly in the creation-composition-bandsmanship and she did not really, happy enough to be idolized for her vocalisms. And perhaps in the end there wasn't enough in the way of co-creators, especially in the end, to help her develop into what she was in potential....

At the same time the over-the-top drug scene found her greatly involved. It was a time for that. And maybe unlike some others (very debatable anyway) that did little to enhance her art. Plus, deep within she had an enormous need to be loved. The stage performances were in many ways a kind of ersatz communal love experience between herself and her audience, but after the show was over, she seemingly felt ever more alone, or so my take on the movie suggests. The very sensitive being she was could be masked in part by dope and she eventually became seriously addicted to junk. NONE of this was good for her musically and the movie points out how her post Big Brother career was in some ways a caricature of her early brilliance, a self-mimicking of her original energy. I do not know. Being a woman then she was not expected and herself demured from really becoming a musical director and in the hands of the major label etc. she was buffeted about in the search for sales and popularity but left a little stranded as the artist she was in abundance.

The movie gives you the fragile, needy, sensitive being thrown into the circus of the rock world and ultimately, becoming another one of its victims. It is tragic but it also lets you know her much better as a person--her letters, interviews, and indirectly or otherwise, her inner feelings, her experience of an enormous lack juxtaposed oddly with enormous acclaim and success.

It is very sad, in the end. It is beautifully done, surely one of the best rock biodocs I have ever seen!
Posted by Grego Applegate Edwards at 7:09 AM