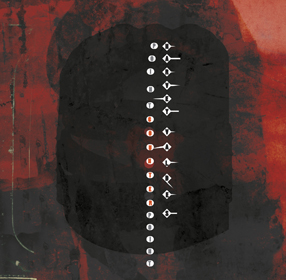 Guitarist Harvey Valdes brings to us a vibrantly iconoclastic trio outing on PointCounterPoint (self-released). The unusual and well articulated instrumentation is Harvey on electric guitar, Sana Nagana on violin and Joe Hertenstein on drums. Each contributes much to the totality, which is a sort of avant jazz rock with pronounced rhythmic presence and odd or shifting meters that are foregrounded by Joe's definitive drumming. The melodic interplay between Harvey and Sana is most unusual, modern in its chromatic expansiveness, ever-shifting and evolving with the two melodic lines intertwining and allowing space for soloistic improv flourishes.

It follows very original post-fusion advanced form with remarkable consistency and some highly unusual ways that unwind with excellence and give Harvey the chance to show a special solo weight both unusual and with an undeniable logic and brilliance. But then Sana is in there too with counterlines of real worth.

It is the kind of music that states its own case, not bending to an assimilation of the typical, but holding its own in exciting ways.

It is of considerable interest from a compositional standpoint but also gives us some wonderful guitar, violin and drum work in the process.

It is something you must check out if you want something new and very out-of-the-ordinary. Oh, no, I do not exaggerate. This is beautifully new!! Highly recommended.
Posted by Grego Applegate Edwards at 6:13 AM