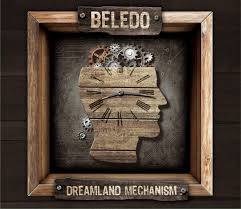 Beledo is an impressive fusion electric guitarist/multi-instrumentalist (violin, keys, accordion, bass guitar), composer and bandleader. His album Dreamland Mechanism (MoonJune MJR 077) brings to the forefront his considerable talents as a guitarist especially and as a composer of nicely advanced fusion platforms.

For this album he is joined by drummer titan Gary Husband with Doron Lev also providing hip pulse for two numbers. Lincoln Goines is omnipresent on bass and Tony Steele chimes in well on two cuts. The Indonesian contingency is nicely represented by cameo appearances of  Endang Ramdan and Cucu Kurnia on traditional Indonesian percussion, plus Dewa Budjana as second guitarist on one number. Oh, and Rudy Zulkarnaen makes an appearance on electric bass.

The power trio is on display for many of the pieces, but others break free of that and add multi-colored sounds, so there are a great deal of fusion possibilities well realized throughout.

The Holdsworth influence can be detected now and again, but never wholesale, and always as a sort of foundation for original developments. Most times though, it's all Beledo.

He is a guitarist of beautiful technique, fine sound and great imagination. This is music in the fusion tradition, surely, but a real contribution to its growth and expansion.

The music is at a high level no matter what piece you hear. It's a true pleasure....Beledo is a true artist!

So dig into this one for some fine listening.
Posted by Grego Applegate Edwards at 6:08 AM