The Damned, Don't You Wish That We Were Dead? DVD Documentary 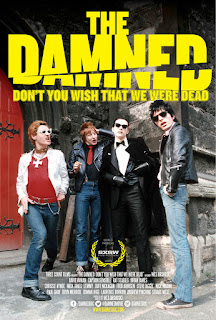 The Damned. One of the first, maybe even the very first punk band out of England. Really? So why are they not legends compared to their more celebrated contemporaries, the Sex Pistols and the Clash? In a way the documentary film Don't You Wish That We Were Dead, now available on DVD (MVD Visual 8307BR) is a complicated answer to that, with three years worth of narrative footage from the band and their contemporaries, live music footage and a kind of total punk attitude.

These were/are street-wise rebels from the working-class England that was especially ripe for expressing the hopelessness of their lot in the era. The original band and its offshoots have been together on and off from then to now, incredibly, and none of them self-destructed for the most part, but hung in (with one exception, but see the video). They were a good deal more musically talented and proficient than some of their brethren.

The personal relations between band members have been strained from time to time, to say the least, and the documentary brings out the squabbles, the infighting, the periodic breakups and realignments and the acclaim that came their way in spite of all.

It's a band that never turned punk into a formula, though they had a huge influence on what that formula became. They did manage to evolve as a band away from stereotyped punk roots--but then so did the Clash.

In the end though you sense the frustration of the band in the later days. They've kept going for around 40 years and what in the end have they gained? As one of them put it, had they all died in a plane crash in 1981 they'd be legends. Now they break the rules as a bunch of cranky old vets supposedly too old to rock and roll but telling the world to f-off nevertheless, going out there on stage and doing it regardless of what the world thinks.

The working-class English accents are occasionally a challenge for US ears, but then without their own narrative testimony we'd miss out on the detailed feeling of being there for so long.

The film is well-done, highly personal, and in its own way critical of the stereotypes of rock stardom. May they continue on for another 40 years! A good one to see!
Posted by Grego Applegate Edwards at 6:28 AM