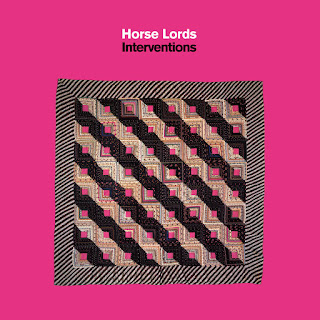 In the last several decades we have seen the increasing advent of avant-progressive electric bands playing with a certain rock heft yet exploring decidedly non-mainstream musical approaches. Horse Lords is one of those bands today, as we can hear by their innovative and creative opus Interventions (Northern Spy 075).

It is a quartet of electric guitar, sax, electric bass and drums, played variously by Sam Haberman, Max Eilbacher, Owen Gardner and Andrew Bernstein. There are synth electronics to be heard as well now and again.

What the music is all about is a well-defined, mesmeric set of interlocking minimalist grooves. It takes advantage of the core rock formation to give us a series of complex hypnotic insistencies. One of the reasons it works so well is that rock has often incorporated repetition into its more astro-oriented explorations, whether in be early Pink Floyd, middle period Soft Machine or classic Dead sprawls centered around "Dark Star."

Horse Lords incorporate some of the electric heaviness of classic psychedelic rock but then remove all vestiges of song or improvisationally linear jam elements in the overt sense. They concentrate on the unfolding groove-repeating aspects. And they do it well!

It is uncompromising in its insistent presence. It gives you some very creative takes on what electric guitar, bass, sax and drums can get going.

Anyone into the avant trance minimalist bag of possibilities will find this album much to their taste. You can dance to most of it I guess, which is only to say that it gets very much into grooves that roll you forward.

Nice. Hear this one!