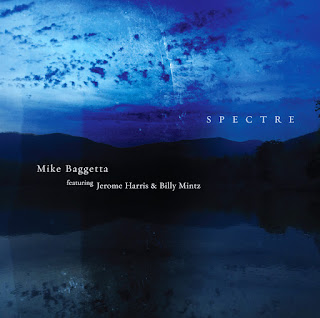 He plies an extended electric sound on guitar these days from some marvelous post-jazz-rock sonics and sensitivities. Joining him is Jerome Harris on acoustic bass guitar and Billy Mintz on drums, in a series of originals by Mike and Billy, some collective improvisational-compositions and an Ornette classic, "War Orphans."

Mike has evolved an original style that here reminds me sometimes of the McLaughlin of  "In A Silent Way" and just after, maybe the exotic touch of vintage Terje Rypdal, but mostly his well conceived original musical self, with some really nice digital delay effects and the trio in a very focused and creative zone.

The guitar work is lyrical and beautifully sonic. There is much brilliance to hear!

And by the way, as it so happens, I post on Mike's earth entry anniversary. Happy birthday, Mike!

Grab this album!
Posted by Grego Applegate Edwards at 6:34 AM