Zhongyu, "Zhongyu" is Chinese for "Finally" 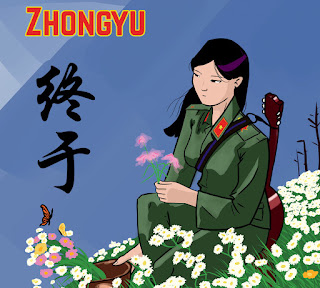 Zhongyu? It is a Seattle-based prog-fusion project with gigging experience in China giving us some progressive, sometimes Chinese influenced modern music on "Zhongyu" is Chinese for "Finally"  (MoonJune MJR 078). Jon Davis heads it all up with his compositions, his Chapman stick, guzheng, Mellotron and ARP 2600. Dennis Rea, who readers of this blog may remember via a number of review posts on this page (type his name in the index box above for those), appears on electric and resonator guitars, Alicia DeJoie is on electric violin, James DeJoie is on baritone sax, flute and bass clarinet, Randy Doak is on drums and percussion, and Daniel Barry guests on trumpet for one number.

This is an unusual blend of prog rock, fusion and a little traditional Chinese musical influence. The band is first rate and the compositions are substantial, original and vividly pulsing. There is a rock edge to it all, especially thanks to Rea's fine guitar efforts along with Davis's dynamic Chapman work and Doak's edgy drumming.

It is one of those programs that covers a wide variety of moods yet holds together as a single statement. If you dig later King Crimson and other ambitious prog-fuse efforts this is an original equivalent.

Fine music that I highly recommend you hear!
Posted by Grego Applegate Edwards at 5:51 AM