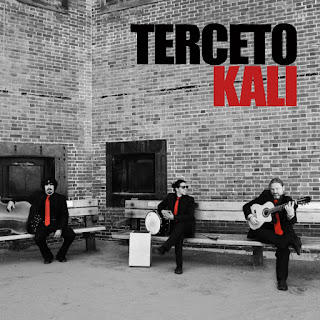 Flamenco jazz guitarist Jason McGuire "El Rubio" is a true phenomenon, an extremely well endowed technical master and a poetically creative improviser. The album Terceto Kali (self released), apparently his second, finds him in the excellent company of Paul Martin Sounder on bass and Marlon Aldana on drums, plus Jose Cortes on vocals for several numbers. The music is all by Jason, with Jose crafting the lyrics for one cut.

Anyone familiar with John McLaughlin's acoustic trio of years back with Trilog Gurtu on drums will recognize a genetic relationship with this music, though Jason stays a bit closer to flamenco roots and their expansion.

But what a guitarist he is! He has it all and makes of it something very much his own. And the trio is a beautiful confluence that extends the flamenco roots into lively fusion territory.

This is one hell of a band, led by one hell of a guitarist! I cannot recommend this one highly enough. Superb!
Posted by Grego Applegate Edwards at 5:41 AM