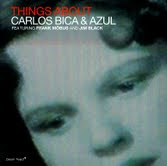 The fifth album by Carlos Bica & Azul is in front of me, or rather the cover, as I listen again for the fifth time this morning. So it's five by five by three, since Azul is a well-developed trio. Carlos Bica plays the contrabass and writes most of the music (with band members contributing in several collaborative efforts and a few of their own compositions). Then there is one by Joao Paulo. Jim Black is on drums. He's a player that can fit into all kinds of situations productively and most certainly does so as part of Azul. Finally there's Frank Mobus on guitar, sounding very good, with a rechanneling of Scofield and Abercrombie influences in part perhaps, but also something definite and tangibly self-originated. He has a way with a line.

There's a good bit of solo space for bass and guitar. Bica and Mobus come through with interesting things, advanced sorts of harmonic implications in the lines. Bica is as effective soloing with the bow as he is pizzicato, which is nice to hear. And his tone is full, lush, resonant.

The compositions are mostly changes based (some rocking back and forth between two chordal-tonal centers) and tend to be in a lyrical jazz-rock mode with some modern balladry as well. The music ought to appeal to ears thirsty for content that has a certain prettiness at times, a grittiness at times, too. And all three are eminently musical, which will satisfy the more demanding ears. I love listening to Frank Mobus get rolling on this one! But then all three are most certainly on a roll here.
Posted by Grego Applegate Edwards at 4:49 AM