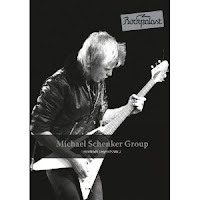 There was a point in the early '80s where hard rock had not yet totally morphed into the cartoon-like exaggeration of professional wrestling. The Michael Schenker Group featured Schenker, a lead singer, a guitar-keys man and a drummer. Their on-stage demeanor was more geared to the honest presentation of their music than it was to a creation of otherwordly persona, of comic-book super heroes with guitars. That of course was going on with Kiss and other bands and it was to dominate the stage style of arena metal in the years that followed.

This is shown refreshingly on their 1981 appearance on the Rockpalast TV series, with a DVD entitled Hardrock Legends Vol 2 (MIG 90227). It's about an hour of the band doing their music on stage. The sound is generally quite good. Schenker plays some nice hard rock lines. The band is tight. After tenures with the Scorpions and UFO this is his first major solo band effort and the emphasis is on the pyrotechnics he was known for. The songs themselves have the typical pristine straightforwardness of the hard rock of the times.

Fans of the heaviness of 1981 in general and Schenker in particular will find this a good way to spend an hour now and then.
Posted by Grego Applegate Edwards at 5:53 AM