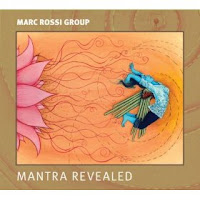 Marc Rossi has a take on Indian-influenced fusion that is thoroughgoingly sophisticated, eminently musical and well put-together. His Marc Rossi Group recording Mantra Revealed (Innova 816) gives us much to experience, admire, and enjoy. It's a core group of Marc on keys, Lance Van Lenten on tenor and soprano, Bill Urmson on electric bass, and Mauricio Zottarelli on drums and percussion. They are joined in important cameo roles by vocalist Geetha Ramanathan Bennett, and the guitars of Prasanna and Bruce Arnold.

This is the sort of fusion that derives its principal thrust from the compositional-arranging prowess of Mr. Rossi. The finely enthusiastic performances in general and the appropriate idiomatic solos from tenor, piano, vocals and guitars give the music depth and drive.

"Jazz Impression of a Kriti" starts off the program with great strength, taking an Indian Kriti (Carnatic compositional element) and transforming it into a well turned fused onslaught in ten with some remarkable guitar work by Prasanna, who plays a nuanced solo that is both informed by traditional Indian phrasing and blazes beyond it into a realm where it mixes with rock and jazz in a post-McLaughlin fashion. The two following pieces pit the limber vocals of Ms. Bennett with some sterling fused-ensemble writing.

The album continues on with an interesting cornucopia of ornate fusion compositions that bring in at times various well-conceived indo-fused elements, as well as Afro-jazz and a hint of Brazilian jazz. The second half of the album generally excels in the architectural intricacy of the melody lines, rhythmically heightened solo work and heavily burnished ensemble work. Bruce Arnold and Bill Urmson stand out for their work on "New Beginnings." "Sahara" has a Tyner-Sanders feel to it, grooves nicely and highlights some rather scorching Van Lenten soprano.

"Voice of 1000 Colors" has a very attractive Afro-Reichian beginning then segues to fused bossa. "Vertical Fantasy on 'You Know You Know'" gives Rossi a chance to comment upon, embellish and give his improvisational impressions of the classic McLaughlin line.

"Feast or Famine" ends the program on a nicely turned modulatory fusion mode.

In the end there are spots of sheer brilliance in the Indo-fused introductory pieces and then some very well wrought mainstream fusion in the following pieces. Rossi is a composer-arranger of great promise and definite talent. The performers give their all (which is a goodly sum) and you go away feeling happy. What more can you ask? Indo-fusologists will love the first half of this program; general fusicologists will appreciate it all I suspect. I reveled in the first half; enjoyed the second.
Posted by Grego Applegate Edwards at 5:55 AM