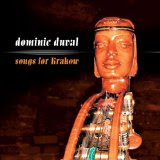 Dominic Duval is one of the foremost improvisation/jazz contrabassists practicing today. His work with Cecil Taylor, Trio X, his own units and countless other associations has won him an avid following, deservedly so. And when a bassist of this caliber goes it alone to make a full album of unaccompanied solos, it is sure to be an event. Songs for Krakow (Not Two) is such an outing, and it has been garnering my enthusiastic attention for more than a week.

The solo bass outing only makes sense with the most accomplished and imaginative artists. It's just you, your bass, your ideas, and what you can make of it all. Happily Songs for Krakow makes much of it. In fact it is one of the handful of such efforts that strikes me should be of interest not only to bass players but to all lovers of the improvisational arts.

Of course Dominic's formidable technique is very much on display, in pizzicato and bowing modes. He uses the natural elementality of the instrument, its open string configuration, the open string(s) along with the simultaneous sounding of stops on adjacent strings, and other aspects of the idiomatic nature of the instrument to bring a primal directness of communication to the ears. There are figures he develops and works variations around and there are free-soaring flights into good blowing areas. And he goes far beyond fundamental string combinations and multiple stops that lay close to hand into stratospheric realms that express potently and emphatically what the solo bass can be capable of under his command.

He cuts lose here. Songs for Krakow gives you about an hour of why Dominic Duval is a bassist of enormous stature. There is structure, there is freedom and there is some wailingly down expression to be savored throughout. Grab it and let your ears travel with the sounds!
Posted by Grego Applegate Edwards at 4:57 AM