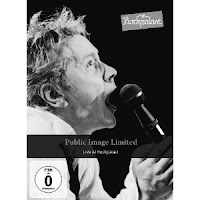 When Johnny Rotten and the Sex Pistols broke up and Johnny went on to form Public Image Limited in the late seventies-early eighties, I was so immersed in my schoolgoing world that I missed it. Turns out that was a pity. Luckily we can retrace our steps later on and I have done that.

One good bit of the band in full flower is on the recently issued DVD of Public Image Live at Rockpalast 1983. This was a West German TV series that put bands in a medium-sized venue and set them loose. And so did they with Rotten and crew. Public Image straddled a line between punk and new age in ways that kept the aggressive thrash aspects of the Sex Pistols and added a bit more riff power and finesse, comparatively speaking.

So you get an hour of the band in good form, doing what they did. The sound is full, Rotten dynamic, the band primed. The DVD includes a short punky sort of interview and a fair bit of the sound check.

Those that lock into this period will find this a good show. These guys had it going then.
Posted by Grego Applegate Edwards at 5:26 AM