Rick Drumm and Fatty Necrosis, Return from the Unknown 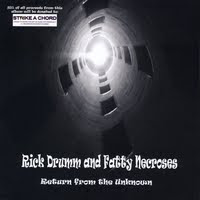 When Larry Coryell cranked his guitar in an early incarnation of the Gary Burton group back in the mid-sixties, it caused a sensation. One side felt that this jazz-rock, as it came to be called, was the music of the future. Another very vocal side thought it an abomination. The music persisted and flowered with Miles Davis, John McLaughlin and scores of others creating masterpieces in the medium. Some of the music was sufficiently inclusive of world, funk and other influences that it came to be called fusion, but the controversy never went away. For a time formulaic versions and the Marsalis contingency served to discredit the music and it nearly fell into eclipse. It was too powerful and open-ended to succumb and there has been continuance, resurgence and new life in the music in the past decade or so.

Enter on the scene one Rick Drumm and Fatty Necroses, and their first album Return from the Unknown (self-released). It's a fairly large band with Drumm on the drums, two guitarists, Fred Hamilton and Corey Christiansen, who also write the music, plus contrabass, piano, trumpet, sax and trombone.

Drumm has an interesting background. Besides his musical world he is in the business world (currently heading up D'Addario strings) and has an MBA. For all that our focus is on the album at hand. It's a good one with a varied palette of music that goes from balladry to fusion to metal to funky. The music is quite well put-together, the ensemble parts have a nice feel to them, the guitarists can tie some fire to their plectrums, the rest of the band can get some solos in there that are worth hearing and the program flows nicely from start to finish.

Now there is much more in the way of detail I could add, but what counts is the togetherness of the unit and their cohesive sound regardless of the stylistic variation. Drumm's drums are the glue that holds it together. There is so much music to be had here in the 63 minutes of the CD, good music, that I will leave off giving further description and just say that if you appreciate the full band sort of jazz-rock, this is one of the better efforts so far this year.
Posted by Grego Applegate Edwards at 5:35 AM