Allan Holdsworth, None Too Soon, 1996, Reissue 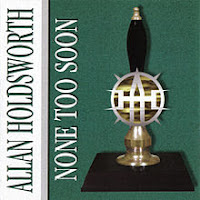 Guitar master Allan Holdsworth's ninth album, None Too Soon, focuses in jazz standards and familiar covers, done the Holdsworth way. It has been reissued (MoonJune 043) after a spell where it has not been around, and I for one am glad it is back.

Gordon Beck the late English keyboardist and periodic musical running partner of Allan puts in some very nice work here. Bassist Gary Willis and drummer Kirk Covington round out the picture with all the right moves.

As Barry Cleveland points out in the liners, though it's a standards project it is primarily a Holdsworthian kind of symposium. He plays in his usual brilliant manner here no matter what the song. The band may swing more than rock much of the time and that's where everything contrasts. Yes, there are familiar head melodies, there is good driving post-mainstream jazz from the trio, and there is sterling Holdsworth from Holdsworth.

So that's where this one distinguishes itself. Another gem from the plectral master. But not just another. It's a little different but no less brilliant. Dig on it without fear.

Posted by Grego Applegate Edwards at 5:05 AM