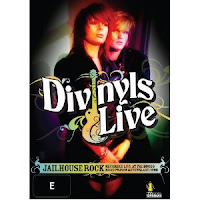 Anybody who reads this blog knows I cover DVDs that have a pretty wide scope. If it has merit and it somehow relates, I cover it.

So today we have the rock group the Divinyls Live (MVD Visual 5363D). It's the band playing an 85-minute set at the Boggo Road Prison, Queensland, Australia, 1993.

It shows you the band could build and generate some hard-ish rock excitement. Vocalist Christina Amphlett prances, gets sultry and sexy, but aside from that really does have a good rock voice. She's a bit low in the mix for the first 20 minutes or so, then not. Lead guitarist (is it Lee Borkman?) does a credible job in the rock showman role and gives the guitar techie a headache no doubt by switching between around seven guitars, a different one for each song.

The band is tight, the sound decent, and they get an early '90s sort of head on things in ways that make for an entertaining go.