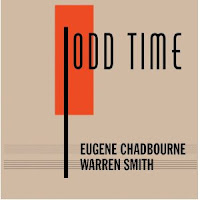 Eugene Chadbourne has been plying his brand of outness ever since I guess the earlier seventies. Warren Smith has been applying his drums-percussion-mallet talents to countless session and recordings as sideman and as leader and composer for many years.

The idea of pairing the two up might seem an odd one, but turns out it works well on Odd Time (Engine).

It's Eugene concentrating on the banjo (he plays guitar also, but not so much here) and the music is divided between some free excursions and Eugene's snide underground ragtime-bluegrass outer-spacial songs. He does some quite credible out-picking, some early jazz ragging and otherwise extends the banjo into the outer worlds in convincing and appealing ways. Warren is right there with him on vibes and the drum set.

"The New War" is a modern day not-so-pro-war song that sticks in the head. In fact the whole album does so. It's a collaboration that extends the music of both and keeps us interested in the process. Good going!

Posted by Grego Applegate Edwards at 5:18 AM