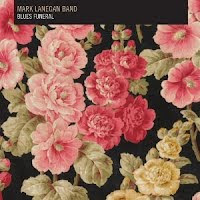 Mark Lanegan was the guitarist with Screaming Trees. He comes up with his first new album since 2004 in Blues Funeral (4AD) and it has a kind of industrial-meets-hard-psych-bluesy combination that's different.

He's doing actual songs in this vein, not just a couple of riffs and a hook or two as some artists seem to think sufficient nowadays. The arrangements bring out the sort of heavy effects-loaded guitar work surrounded by a little empty space that allows the beat to come across and then wall-of-sound moments come in and out as well.

It's not what I expected but it also is quite a reasonably good effort that bears lots of listening without tedium. His voice gets a nice burr to it and there's that big guitar. So what's not to like?