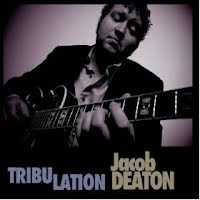 What we have on hand today is guitarist Jacob Deaton's album Tribulation (self released). I don't have a press sheet with this one, so I don't have much in the way of background. The music speaks though.

Jacob Deaton plays some worthy lines coming out of a fir-ey mainstream thing. His band may not be filled with names you necessarily know, but they can do what they set out to do. It's Akeem Marable on alto, Nick Rosen, piano, Craig Shaw, bass, and Justin Chesarek on drums.

The rhythm section cooks, Akeem and Rick can do some soloing that is up there, and the compositions give the band some good blowing vehicles.

Where there's smoke, there's fire. And there's fire. Jacob is quite generous, giving all the band members the time to express themselves. You end up with a collective conflagration playing some top-notch hard-bop and beyond. So get some ear time with this and I think you'll find no regrets on that score.

Posted by Grego Applegate Edwards at 5:40 AM