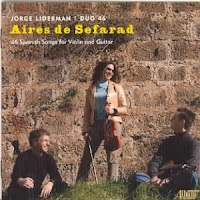 In the course of receiving music to review for my blogs there is always some amount of serendipity. The willy arrives with the nilly and one combs through with a feeling of the mystery of the unknown. There are things I get that come as a complete surprise, but not all that many. One of those is today's CD, Duo 46's recording of Jorge Liderman's Aires de Sefarad, 46 Spanish Songs for Violin and Guitar (Albany 829).

Duo 46 is Matt Gould on classical guitar and Beth Ilana Schneider on violin. They sound very good on these 46 miniatures. Gould brings out the Spanish folk quality of the songs; Schneider combines a very beautiful tone with facility and a kind of Spanish abandon as called for.

Jorge Liderman's Aires are set firmly in the melodious, sometimes ornate idiom of a Spanish set of songs without words. The spirit of Rodrigo has some bit of haunting to do, yet there's a touch of the neo-classical Stravinsky as well. It's something Hovhaness might have done if he had Spanish roots instead of Armenian, which is only to say that Liderman gives forth in the minor strained songs with a kind of bedrock fundamentality that Hovhaness did so well in his most "ethnic" works. These however are only impressions and affinities. The cycle stands on its own.

It's music of brevity, beauty and rich association. Duo 46 gives it a very appealing spin. They approach the songs with a vivacity and elan that seems just right. This is music that never sounds out of place to me, no matter the mood. And so I very much recommend it.

Posted by Grego Applegate Edwards at 4:36 AM