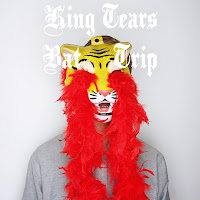 This is out music like nobody else does. It's a Seattle-based outfit. The album is download only, five bucks. The ensemble is headed by Luke Berman, who plays an out, detuned guitar throughout. It's him, four drummers, chango-percussion and a big sounding tenor sax played by Neil Welch.

The sound of the band on this two-cut, 40 minute album is uncanny. The four drummers and percussion set up a monstrous quasi-African-Haitian groove, the tenor and guitar play unearthly themes, and the tenor solos rip a hole in the heavens.

It's wonderfully huge and crazy. Go to the Table and Chairs website http://www.tableandchairsmusic.com/ to hear the music and order a digital download. A better quality sound version of one cut you can listen to at http://soundcloud.com/tableandchairs/stolen-police-car.

Wowie-zowie! I hope they do some more!