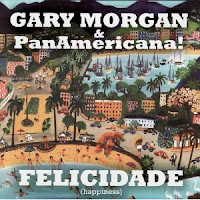 It's time for a switch of gears today, to a Latin-world-jazz big band of note: Gary Morgan & Pan Americana and their album Felicidade (CAP 1014). It's a full big band under Gary's direction, playing some very nice charts worthy of our ears for the grooving Latin qualities as well as for some very tight big band sounds, played with plenty of verve and fire. That is to say that is as much a very good big band as it is a very good Latin big band.

That is to say that the arrangements hold their own whether you are listening for the Latin qualities or just experiencing a big band in full flower. The program is divided more or less evenly between Gary Morgan originals, and they are quite good, and Latin compositions by the likes of Jobim and Pascual.

There are very decent soloists to be heard, the rhythm team hits it and the section work is virtually flawless and full of spunk.

This one has been out since 2007, but it should not be missed if you are into the big band modern style and/or the Latin thing. Bueno! Bueno!

Posted by Grego Applegate Edwards at 5:01 AM