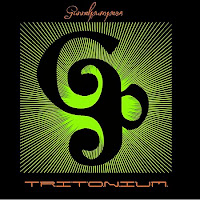 Some music takes a clearing of the mind and its expectations to appreciate. The Chicago band Gunnelpumpers makes that sort of music. Gunnelpumping, they inform us, is "the act of standing on the rear gunnels of a canoe and propelling the craft forward by pumping one's legs." And does the music do that in its own way? Maybe it does.

At any rate their new third album, Tritonium (Spiritflake 0003) is the topic at hand. It's two upright basses (including Douglas Johnson from the other day on his Clevinger bass), one electric bass, electric guitar, drums and percussion.

This is free psychedelia that depends not so much on individual solos or harmonic movement as drone-groove with multiple musical textures of the acid rock sort in general, but lots of bass doings especially.

It's not music where there are going to be composed themes. It's free and goes where it does in semi-trance fashion. The old bands from the halcyon days of psychedelic rock would often jam on a single pitch center. Gunnelpumpers do that but in a much more evolved way than some of those early raga stimulata events at the Fillmore.

And that's what is happening here. Not so much riffs, not strings of solos, but collectivity and sound texture.

They do what they do well. It's something to zone with. So get it and zone.